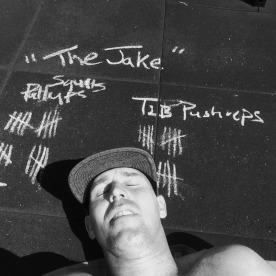 I am an avid fan of fitness and an agnostic crossfitter.  I have been working out for 27 years.  I was a high school power lifter and part-time class goer.  I studied Zoology at L.S.U.  I played rugby and actually studied during my college days.  Upon graduating, I discovered I did not wish to remain in Louisiana.  I started to travel and Korea was my first choice.  I moved here the first time in 2001.  I began to play rugby for the Seoul Survivors Rugby Club and enjoy Korea’s many amazing highlights.  I live here on and off for 11 years.  In that time, I have also lived and worked in England and Norway.  I also squeezed in a Masters in Teaching during this time.  During all my travels, fitness has remained the only true constant.
I began what the world calls “Crossfit” or high intensity circuit training during high school in the early 90’s or late 80’s.  It was not till the release of the movie “300” did I do a Crossfit WOD that was released and programed by CrossFit.
I was certified as a Level 1 in 2011 and re-certified in 2016.  I have a mobility certification as well as a gymnastic certification.  I have competed in the games since 2012 and made it to regionals once.  I Crossfit because it makes me better and it makes me happy.

Please email us to set up a class.

Please click on the link above to join us for an introduction to CrossFit at Collier Fitness Center.  This class is required before attending classes if you’ve never done CrossFit before, or if it’s been a long time and you need a refresher.

Enroll in our next

For more information, please e-mail us at info@fighttonightcrossfit.com or find us on Facebook – Fight Tonight CrossFit.

Most Popular on FTCF!

Fight Tonight CrossFit is not endorsed, nor is it funded, by the Department of Defense or the Department of the Army. This is a non-federal entity non-profit organization that promotes the fitness and health of members of the aforementioned. The views here are not necessarily the views of DoD, US Forces Korea, or the US Army.