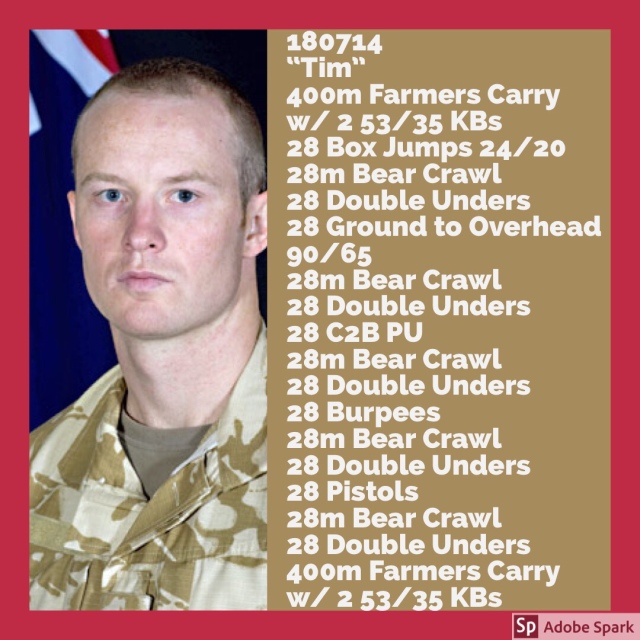 Lt Tim O’Donnell, 28, was serving as part of the New Zealand Provincial Reconstruction Team in the Bamyan Province, Afganistan, when his unit came under attack.  Lt O’Donnell was killed.

Two other New Zealand defence personnel were seriously injured;  Lance Corporal Matthew Ball, 24, who is a friend of CrossFit New Zealand member Nick’s from primary and secondary school, and Private Allistar Baker, 23.  Lt O’Donnell is New Zealand’s first combat death in Afganistan, and New Zealand’s first combat death in over a decade.  Lt O’Donnell is survived by his father Mark, a former police officer, his mother Mary-Anne, a nurse, his brother Andrew, and his sister Anna.

Please email us to set up a class.

Please click on the link above to join us for an introduction to CrossFit at Collier Fitness Center.  This class is required before attending classes if you’ve never done CrossFit before, or if it’s been a long time and you need a refresher.

Enroll in our next

For more information, please e-mail us at info@fighttonightcrossfit.com or find us on Facebook – Fight Tonight CrossFit.

Most Popular on FTCF!

Fight Tonight CrossFit is not endorsed, nor is it funded, by the Department of Defense or the Department of the Army. This is a non-federal entity non-profit organization that promotes the fitness and health of members of the aforementioned. The views here are not necessarily the views of DoD, US Forces Korea, or the US Army.